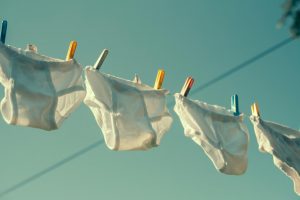 It’s official guilty mothers. Thongs are out and big pants are back.

Don’t just take my word for it, in the UK the sales of thongs which soared through the Nineties to meet the demand for hipster jeans is now in the decline. M&S, which sells 60 million pairs of knickers every year said that they less than one in 10 of the knickers they now sell is a thong. Thank goodness for that. I can’t pull off a thong like I used to. No chance. And would I want to? Were they even comfortable – ever?

Now it’s all about big pants or parachute pants as I fondly like to call them. They are so huge sometimes I think if I was in a fire on a second floor of a burning building, I could remove them and use them to parachute myself to safety. You never know…

According to Bernadette Kissane, an apparel analyst at the market intelligence firm Euromonitor, huge undies are a growing trend and it is considered cool to be wearing full-bottom underwear. I’m so happy to be considered cool again. Who can forget poor Bridget Jones when she realised Daniel Cleaver was about to see her ‘giant granny pants’ in the hit film? Was it a mood killer or actually a mood enhancer? At least the pants made them both fall about laughing, even if it is just a movie.

So I needed to talk to you about my issues with M&S. As much as I love the brand, I am seriously confused with their underwear options. Whether it is M&S or just my lack of understanding, I am unsure; but I will explain.

So the time comes for me to pop to M&S for new knickers. I browse all the lovely lacy ones, with no intention of buying them. I am looking for comfort. Sorry, but it’s true. My husband tells me he loves me how I am, so he will learn to adore my choice of underwear as much as I do. Like many other mothers, I wander over to the packs of five. Some spotty, stripy, black or white. To be honest, it really doesn’t matter on the design. I normally have at least one or two children in tow with me, so I am keen to pick up what I need and move on. However, I seem to be confused by the low rise, bikini, mid rise, high rise and full brief. I mean, how high is high?

Every time I pick up a packet, I often find that someone has already rummaged through the packaging, taken out a pair, looked at them and squashed them back into the packaging again. Surely, M&S must need to employ someone full time just to neatly fold that one pair back into the packet, as it always happens! I would love to see that job description. Perhaps because I am slightly OCD, I don’t wish to pull the knickers from the packet and check as I don’t want to open it. Silly I know as everyone else does. So, I am largely reliant on the photo on the packaging to make a 30 second judgement call on whether these are the right knickers. Why is this relevant? Well, let me enlighten you.

I picked up a packet of full briefs but I didn’t really understand what that meant. When I opened the packaging the next day to put on a pair, well, they are – full briefs. Big pants. However, they are silky soft, no VPL and come up almost to my belly button. Arrrhhh, lovely. Now my tummy is warm too. Genius. I wear these knowing it is wrong. A thirty something woman should not be wearing these…but they are so damn comfy.

I continued to wear these for a while, knowing it wasn’t right, until this happened. I was up the gym. I had a training session. I felt good and came down to get showered and changed. Whilst changing, the room is full of, let’s say ‘more mature’ women who have just finished their aqua aerobics class. Whilst changing, I slipped into my full briefs and glanced over to the sixty-year-old lady next to me. We were wearing the same underwear. She smiled at me, saw my underwear and nodded in approval. I uncomfortably smiled back. On my goodness. I can’t wear these anymore. It’s going to have to stop. I mean, what was I thinking?

Don’t get me wrong, I do have some nice underwear in my collection but plenty of comfy M&S numbers too. I am convinced myself that big knickers aka parachute pants are back.

So, guilty mothers, let’s walk down the street in our parachute pants. Let us hold our heads high…without a wedgie or VPL in sight.