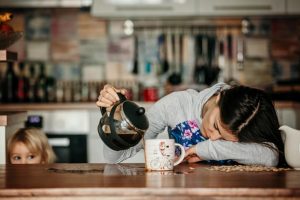 As days often seem to merge into each other, do you often wake and feel like you haven’t actually been to sleep? Did I actually sleep at all? I thought I had just nodded off. I often wake with a fuzzy head, dry eyes and a dull headache. Or is this just how it is supposed to be now? Should we say goodbye to those eight-hour slumber sessions and hello to short, sharp snoozes throughout the night.

Regardless of whether your child is one, three, six or older, like many mums (and dads perhaps for that matter), many of us struggle to recall when we last had a really good night’s sleep. I remember precisely when I had my last amazing sleep. It was on my honeymoon, in The Maldives in 2007 – it was awesome. It was so awesome, even my husband would agree – we slept so well then. However, even these days, give or take, my husband still manages to sleep pretty well; but for some reason, I don’t.

Perhaps mothers just overly worry about children in the night, but I appreciate in reality, they are absolutely fine. So, why then do we have to sleep which our ears pricked up like foxes on high alert, you know…just in case. I mean, really, what am I listening out for?

There are times of course when my children wake in the middle of the night and they genuinely need attending to. Although sometimes I am sure it is just for attention. I find myself walking around the corridors at 3am like a zombie, from kids room to bedroom.

Many mums suffer from overthinking as soon as our head hits the pillow. Personally, I find myself constantly doing lists in my head, when I should be counting sheep. Perhaps if I turn those sheep into post it notes jumping over the fence, maybe that would be a good compromise.

So while my husband sleeps, I’m creating virtual lists. I fear this situation has become so dire that when I woke last Sunday, the first thing that came into my mind was that I forgot milk on my Sainsbury’s order. I mean really. Milk? That’s the main item I should remember. It is so ridiculous and I am frustrated with myself for even giving this a second thought. It’s really not like a can’t get this ‘stuff’ anywhere else.

With mummy duties on a constant round the clock service, I can only assume stress is a key factor here. I have a good support network around me and I have already said that as part of Guilty Mother, I cannot and will not remember everything or do everything perfectly, because I can’t. According to a survey from workingmums.com in 2010, Nearly three quarters of Brits are struggling to get a good night’s sleep because of work worries. Sundays are the most common night for a work-related dream.

I don’t know about you, but I am really naughty for taking my smartphone to bed with me. Not actually in bed with me of course, but it’s pretty close by. I will make the excuse that I need to use it for my alarm. My husband says I am addicted. I of course, deny this. He says it reminds him of his time in the army when he shared a room with a smoker. The last thing he heard at night was the final puff of a cigarette and the first thing he heard in the morning after the alarm, was the ‘click click click’ of his roommate’s lighter. In my husbands’ view, this is the definition of addiction – if it is the last thing you think of at night and the first thing you want to do in the morning. So, if your smartphone was your cigarette in your hand in bed, how comfortable does that sit with you now?

According to BusinessInsider.com, screen time right before bed is bad for sleep. This probably seems obvious, but using your smartphone late at night also makes you feel depleted in the morning, thereby making you less focused and engaged at work, according to a small new study.

So it’s onwards and upwards to not counting lists and start counting sheep.