Grown Up Breaks. Without the Darlings…

Grown Up Breaks. Without the Darlings… 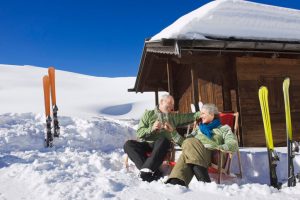 My husband said he wanted to head to the slopes for the long weekend as a belated birthday treat. I told him it sounded like a terrific idea. I said the children will be so excited. My husband corrected me. He said “I meant just you and me. Not the children”. What? Did I hear those three little words: without the children?

The reason I started writing Guilty Mother is purely because of those feelings that rise up inside me where I am overwhelmed with guilt for the idea of not being with the children all the time. However, the other reason for writing the blog is to get more clarity on the subject and share these feelings and thoughts with others.

I think we all know that time together as a couple is really important. When I told a fellow school mum I was off for a short ski trip for two, she gave me a very encouraging response. She said “good for you. It’s really important to spend time together on your own.” In fact, perhaps sometimes more important than some give it credit for. In a recent study by Thomas Cook, 78% of the parents asked believed having a holiday without the children would strengthen their marital relationship.

No sooner had I said yes to the break, my husband had booked the flights and a luxury hotel for four nights. It wasn’t until nearer the date of departure that I started to feel tense about the trip. Firstly, my son was absolutely convinced he was coming with us to the Austrian Alps, to the point whereby he said “Are you packing the suitcase mummy? Wait a minute, let me just get my googles!”. In a flash he had ran upstairs to find them before I had a chance to shatter his dreams. How do I tell my son he’s not invited? Gulp.

I had convinced myself it was just a few days away, but it didn’t make me feel any less

guilty. Once I got to Austria, the guilt had almost spiraled out of control. As soon as we got to the hotel, I was close to bursting into tears. I needed to get a grip. It was just four nights.

The first day of skiing was great. We cruised around the slopes with ease, stopping for lunch and not rushing for anything or anyone. I had many moments of thinking I had either forgotten something or needed to be pick someone up – but I didn’t and yes; it was liberating.

As soon as I saw a child on the slopes, I felt incredibly sad I had left mine at home…and the guilt continues. When we met a friendly German family that we sat with over lunch one day, they had their son Max with them. He was five. My husband said “we have two children”. There was a pause and then he said “Yep. We left them at home”. I felt slightly embarrassed but my husband wasn’t. He was proud to be spending some quality time with his wife.

It’s a personal decision to leave your children at home while you go on holiday, but if you are able to make the logistics work and are brave enough to do it, I would whole heartedly encourage it. It was only on the day before we left Austria that I had allowed myself to be free of the guilt and let myself to enjoy the moment.

Organising short breaks like this does not come easy and it took nearly six months to get everything in place, moving the children from one place to another. Friends and family had rallied round to make this work and I am very grateful.

I should add that a few days without Mummy and Daddy have a salutary effect on the offspring. They, too, are refreshed by the break and despite my guilty breakdowns on the slopes, the children had a little adventure of their own. On our return, they couldn’t wait to tell us everything they had been up to.

So here is Guilty Mother indeed, still trying not to be…