Should Smartphones be banned for children under sixteen?

Should Smartphones be banned for children under sixteen? 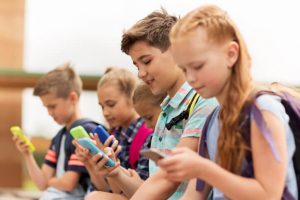 A recent article published in the national press has become a hot topic of conversation. Steve Hilton, a former adviser to David Cameron says he is so concerned about children accessing adult content on the internet, that he wants under 16-year-olds to be banned from having smartphones. Steve Hilton argues that alcohol and tobacco are illegal for under 16s because they are bad for them, and the same should apply to smartphones.

It is an interesting point. With our own addiction to smartphones, how can we protect our children from technology from an early age? Not surprisingly, the average British child receives his or her first mobile phone at the age of 12 but many children have limited access to a connected device much earlier than that. You know what I mean…giving your six-year-old daughter your iPad so you can finish your dinner in Pizza Express #digitalmum. Most of us are guilty of it. Today, I was invited to share my views in the BBC Radio Kent studio with presenter Julia George, alongside dad blogger, John Adams (www.dadbloguk.com). I shared some of my own childhood stories with Julia, on how technology has changed so much since my childhood in the 80s. I told her that to find my friends, I would simply look for a pile of bikes by the woods and bingo; I had found them. So, considering how much we all adore Apple devices, you may be interested to know that when the New York Times asked the late Steve Jobs “So, your kids must love the iPad?” Jobs responded “They haven’t used it. We limit how much technology our kids use at home”.

During the radio interview, I expressed how I can understand why parents would want to give a mobile device to their child, especially if there was a logical reason of why they are doing so. The main buzz word seemed to be ‘safety’ and of course, the safety of our child is vitally important. A popular reason to give a child a smartphone is if a child going into secondary education and perhaps they take a long bus or train journey into school. Like many parents, we worry that they will get home safely. A parents, all we want is a call or a quick text to say the child is ‘OK’, and if they have missed their bus, we know to expect them to be late. However, we should be clear on what device they need. They don’t necessarily require a smartphone. Simply give your child a basic, Nokia feature phone, such a Nokia 100 for calls and text, which does not require access for data. If you have a mobile contract, request the network or provider to bar GPRS, so they can’t use their device for data services.

In a recent study by Nottingham Trent University, they asked a small group of 18-33 year olds to monitor how much time they had spent on their phones. The results confirmed that we look at our smartphones for an average of five hours a day, checking the device about 85 times a day. How often do we find ourselves staring at our devices without even really knowing what we are looking for? We do this out of habit more than anything else. In a Nottingham Post news article, they watched sixty-one people cross the road and a shocking 41 of our 61 glanced down at their smartphone while crossing!

In today’s interview with Julia, I couldn’t help but get a fraction nostalgic. Julia asked if anything bad had happened to John or I when we were teenagers and without a smartphone. The answer was no. Did my own mother worry about me when I was home abit late? The answer again was no. She just always knew I would be home when I was hungry!

So next time your teenager says they want to go to their room at a Saturday afternoon, make sure you try and drag them outside, surround them with nature and let’s hope they thank us for it later.

For more information and advice, please check the parenting section of the Guilty Mother website.