Gin and On It

Gin and On It 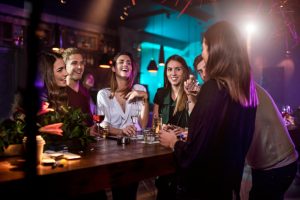 ‘Hitting the town’ is never as easy as it used to be. Firstly, it’s the simple of matter of getting a date in the diary. Never have we known this to be so difficult. How did we all just become so busy? When we start a text message group, clearing named ‘gin night’, we all want to get there, but we will have to choose a date that takes at least ten text messages to get there. Eventually, boom…it’s the diary…for two months later.

Because it takes so long so organise, the anticipation and excitement continues to build until the day itself, which means there are many ongoing conversations with the other half, reminding them, very clearly – that you are ‘going out’. Your other half will roll their eyes about the constant reminder, but you are buzzing with pure excitement, like a kid on far too many packets of nerds.

Now then, what to wear? Do you go casual or smarten up as this is a special occasion? Oooohh, this is too exciting. Let’s go with the Zara blazer and black jeans that I wear every time I go out. Then it’s time for me, who lives the furthest out to organise the taxi and collect everyone on the way through.

Now, with any girls night out, we all know there are two rules:-

The first rule is to book a restaurant to ensure you eat at much as possible. As we are planning to throw a gallon of prosecco down our throats, we will definitely need to eat. As we sit down, there’s too much conversation to go through, so like speed dating, we accelerate the speed of our chat. We cover as much as possible, including the usual hot topics, work, kids, sex, life, pets – all at 100mph as if it was a challenge on the generation game.

The second rule is to drink plenty of water, but unfortunately, we forgot that one. As a jug of sangria is shared around the table, this becomes a fair water substitute. We then promptly decide we need more food. As the waitress kindly recommends some side dishes, it seems practical to simply order one of each. As the sound of cackling laughter increases, I notice the poor couple in the corner who are probably out for a romantic anniversary meal. Unfortunately, for them, they have been stuck on the table next to us. Poor souls. Oh well…

As the time ticks away, we suddenly realise the restaurant is closing and we are the only table left. We try to divide up the bill between us, which is not easy when you feel bleary eyed. Only made more complicated when one of you shouts “but I didn’t have any cheese and spinach balls” so you need to take that off my share. Arrrggghhhh!

As we stagger down the road to a nearby bar, gin and tonic and cocktails are officially in full swing. As we laugh and tit about, a couple of us dart out for a secret cigarette (we have to borrow from someone) and we pretend we are eighteen again.

All of a sudden, we hit a tipping point and there’s no way back. As my vision starts to blur and I regret the two cigarettes I just smoked, I quickly realise we have had far too much to drink and need to go home…now. As the clock turns midnight, just like cinderella at curfew, we quickly make our way to the taxi rank. We all talk a load of rubbish to the taxi driver who politely nods at our bizarre questions we throw at him for the next ten minute drive.

As I turn the key in front door, I quietly try to tip top inside. This attempt fails terribly and I end up making more noise. I move into the kitchen and consume two slices of toast and a packet of pom bears. Actually, make that three packets of pom bears as they only taste of air and contain zero calories…right?

As I lay down, the room starts to spin. I desperately try to spin with it until I pass out. In the morning, I wake up alone. My snoring has meant my patient husband has taken himself off to the spare room. As I try to get up, I am ill. Very ill. I look around at my family for sympathy and I receive very little. It was my own fault. My hangover lasts all day and a full English breakfast can’t fix this one alone. I vow to myself that I will never drink again. I remind myself that I am getting too old for this.

Later that evening a text message pings on my smartphone. The girls are planning the next date in a month’s time, which of course, I will attend. A months green tea detox recovery time should suffice. Namaste.