Top Tips for Flying with Kids

Top Tips for Flying with Kids 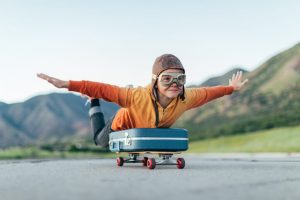 Ahh!….a nice relaxing flight to start the holiday, or that’s what we all envisage in our minds, right? We spend months and months planning the perfect trip and we just can’t wait to get there. It starts with the packing and I can already find my stress levels rising. Why is packing so stressful? I am that parent who has to start packing the cases at least a week before we leave. With a few days to go until the flight, I start to mentally prepare, neatly laying out the family clothes like a regimented soldier. I’m paranoid about forgetting something important and of course, I always do (my son’s swimming shorts). But, I also have to remember that as long as we have medication and contact lenses, we will survive!

It may have taken me seven years to figure out but I think I’ve finally cracked the best way to fly with children and I wanted to share some of my tips.

We refer to these flights as an ‘adventure in the night’ and the kids love it. If possible, get an early flight out (5am check in) so you’re not hanging around at home waiting to leave. Put the kids to bed in loose clothing (leggings, t-shirt) and wake them at 3:30am for their adventure in the night. They will be excited, but they tend to still be sleepy in the car and at airport check-in, which means you’ll have a more relaxing start to your trip. They only really wake fully once you get through security checks and then you can start to relax.

As a family of four, we always used to get three seats in a row and a single aisle seat. That way, we all sat together. However, I have finally figured that this system doesn’t work. One parent gets trapped between both children and you feel resentment for their other parent for the whole flight. You throw daggers are them while you watch them enjoy ‘House of Cards’ on their iPad and leisurely sip their coffee. You try to find ways to entertain both kids either side of you, but it’s not an easy task and to cap it off the children fight over the window seat. Moving the seating around now is too much hassle. You’re trapped for four hours.

I actually discovered this by mistake, the airline once allocated us two seats back to back on separate rows as it was all the had available, however, amazingly, it ended up being a genius seating idea. For a family of four, this seating arrangement means that both children get the favoured window seat and their sibling is seated behind them, still close, but not close enough to wind each other up for the duration of the flight. It’s still easy to pass items between parents and I find that the children are better-behaved if they have one-on-one time with a parent.

We all know we are on our devices far too much these days, but hey, when it comes to keeping kids entertained on a flight, iPads and other devices are the best invention in the world! Avoid tantrums by making sure your devices are fully charged and loaded up before you travel. There’s nothing worse than realising that new movie you promised them hasn’t downloaded in time. If you can, download something new to keep them entertained. Don’t stop at iPads either. Take whatever you can to keep them quiet and content for as long as possible, smartphones, Nintendo DS, you name it. I know too much screen time isn’t a good thing, but when my kids try doing some colouring on the flight, we pretty much lose all our felt tip pens under the seats during take-off, so we quickly run out of options.

Blocked ears at take-off and landing can be uncomfortable for the kids, so if you have babies or toddlers, administer milk to ease the pain. Any cup with teat holes for suction will help their ears to pop naturally. For older kids, make sure you stock up on plenty of fruit lollies or boiled sweets. Make sure you take more than one, as often they finish the lolly before take-off! I carry a bag full. Sometimes I do a good deed and offer a lolly to another child who is upset too (with their parents’ permission of course!). Your fellow holidaymakers will be very grateful for the peace and you’ll feel super smug for being such an organised parent and avoiding a meltdown.

There have been many times when I have got on a plane and thought that I didn’t need to buy snacks for the kids are there will be plenty of onboard snacks. We had skipped breakfast hoping to get toasted sandwiches onboard. However, mid-flight the airline had run out of food and all they had left was a coleslaw salad which my kids would not eat. The kids were really hungry and I felt terrible for not having anything spare to offer them (guilty mother!). All I could offer them was a chocolate bar, which strangely, they didn’t want either, which made me feel even more guilty. I now try and stockpile in advance with a bag of plain biscuits, cereal bars, lollies and crisps to keep everyone going on a long flight.