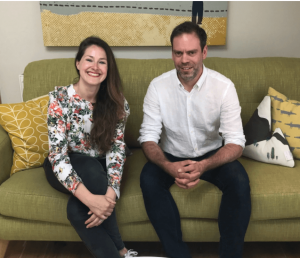 Guilt is a common emotion that we all experience. Women, in particular, are prone to feeling guilty, according to research. It was a big enough subject to be the most fitting name for my parenting blog – Guilty Mother.

A 2010 study published in the Spanish Journal of Psychology revealed that, on average, women tend to feel guilt more intensely than men. Across all age groups, female participants were also more likely to feel distressed when faced with interpersonal situations that trigger moral dilemmas – a finding that may explain why new dads are less likely to feel bad when they leave their children for work.

So what exactly triggers the cycles of self-blame, and are men affected in the same way by fatherhood? There was only one way to find out. I recently met up with award winning parenting blogger, John Adams (www.dadbloguk.com). John and I had met previously at a parenting event in London and also have spoken together on BBC Radio Kent. So when John suggested meeting up to film a few parenting videos, including the big ‘guilt debate’, I thought it was a great idea.

John and I talked over tea on my favourite subject – parenting guilt. We both felt that mum guilt was often heavily discussed, but what about dad guilt? I often talk to friends about guilt and careers – but does guilt affect dads too? It never really occurred to me to chat to the dads about this subject. Sometimes it can seem like they don’t suffer as much – or is it all a front?

For me, I’ve always been a career woman and I enjoy pushing myself to do better. Equally, I always knew I wanted children. Before I had children, I used to work 13-hour days and I’d come home, sit down, put some dinner and unwind. I didn’t have to think about the needs of anyone else except for my husband, who also works long hours. It never crossed my mind that I might try being a stay at home mum, only because I felt I enjoyed my work. My work was part me, a company I owned alongside my brother. My business was always my first born.

As soon as my daughter was born in 2009, it was like being automatically enrolled into the Guilty Mothers club and they hand you a badge to wear. When you have a baby, you almost expect a load of people to turn up at the hospital as part of an inauguration ceremony to welcome you to the club. Some days the guilt was overwhelming and the tears would flow. Was I looking after my baby properly, was she too cold, too hot? Why didn’t I have enough breast milk to feed my own baby. The guilt seems to start right there. After we had our son in 2012, I returned to work five weeks later due to work commitments. On some levels, I regret returning to work so quickly but I can’t change that decision now. It was a choice I made at the time and I must move forwards.

Although I work full time, these days I try to feel less guilty. I know my children are happy, secure and loved. Our family nanny takes extremely good care of our children when we are at work. I hope there will never be a time when they don’t feel loved because that’s the important bit to me. Just because I choose to work, doesn’t make me a bad person. My work is part of me in the same way my children are part of me.

It seems that now, more than ever, mums and dads are seeking out the best work-life balance that they can. It was a hot topic John and I discussed that day. Many parents enjoy being there for the school run. Some mums and dads are trying to work smart. Seeking out work they can do from home, around their children’s routine. And why not? It makes perfect sense. It seems to work well for John Adams (www.dadbloguk.com) as he can write his blog from home around managing the household and everything his girls need. I admire him. I think John is a great example of a modern husband. Running the household, supporting his wife in her career and doing a job he enjoys that he can write from anywhere. I almost felt a pang of jealously. It looked as if John had achieved the perfect work-life balance. You can find out more on what he said on the new YouTube video coming soon.

Is Guilt a Good Thing?

To answer that question, I suppose we could say it has been a good thing in my instance, as I have created a blog around the subject, which has captured the attention of almost thirty thousand readers! Guilt can be healthy and unhealthy. Guilt can mean that you care, which is no bad thing. However, when we constantly over worry about whether we are making the right choices for our children, those feelings can weigh us down. Excessive feelings of guilt can interfere with our emotions, leaving us feeling drained, which is not necessarily a good thing. Did John say he sometimes felt guilty? Yes he did. He felt the same as we all do sometimes.

John Adams questioned whether we feel guilty about being too attached to our smartphones? Well of course, I answered! Technology has made life easier, but it’s also blurred the boundaries between work and home life. Find out more on the video.

In summary, kids are more resilient than we sometimes give them credit for. As life goes on, I’m trying to make a conscious effort to let things wash over me a little bit more and perhaps, be a little kinder to myself. To stop beating myself up and making myself feel guilty – about everything.

As long as a child feels loved and nurtured and safe, they’ll always be okay.