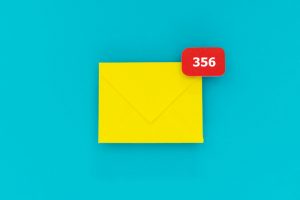 I used to love getting emails, but these days I often feel like I am drowning in emails. I always thought emails were supposed to be a productive communication tool but sometimes I worry it keeps me from getting more important things done which in turn, can make me less productive.

Imagine for a moment if you only sent and received six emails a day. Yes, you heard that right. Six emails. Sounds like total bliss, doesn’t it? I recently read an article in The Times which has stuck in my mind. Inventor and billionaire Sir James Dyson apparently only gets, and sends, six emails a day. Six! He does so by banning staff from emailing internal memos and gives new recruits notebooks and pencils for meetings. He also encourages talking in the office. Yes, chat. “We’re creating things, working out how to sell them,” he has said. “You can’t do that on your own. You have to talk.” Perhaps he’s got a point.

Over the years, it’s fair to say that technology has transformed the way we work. It has become such is a big part of our lives and made us more mobile than ever before. Being a woman in tech, I am very aware of this. On a positive note, technology has freed more parents to have flexible working from home, or indeed, from anywhere in the world. Furthermore, technology is transforming how we teach and entertain our children. Educational, information, research and, for teens, socialising, which is important to them.

So, just how much have things changed? According to a recent article on Forbes, a senior executive who in the 1970s might have received fewer than 1,000 outside phone calls a year now faces a tidal wave of 30,000 emails and other electronic communications.

More recently, in an effort to de-clutter my email inbox, I tried connecting and instant messaging more fellow bloggers and brand on Instagram, which in part – has worked. However, when I enquire if they are interested in collaborating, they reply with “Sure! Send us a follow up email and we’ll take it from there”. This then becomes a frustrating, lengthier task as it means I am now duplicating the same message.

Here are 3 ways to help clean up your inbox:-

1. If you want to receive less email, send less email

It might sound incredibly simple, but if you want to receive less email, then send less email. It’s the golden rule of email management according to LinkedIn CEO, Jeff Weiner. Try to avoid over-sharing or copying lots of people into your email, who don’t really need to be involved.

You might be surprised just how many marketing or announcement lists you may be signed up to. Do one thing today and Unsubscribe.

The alternative option is to think smart and set up a completely distinct Gmail account that’s only for list subscriptions. You can do whatever fancy filtering you want in that account. You can subscribe to everything, and have only a few that make it to your inbox. You can filter your favourite subscriptions to go to a folder that you check every so often.

If you are like me then you will be tempted to check your email every ten minutes or so. It’s a habit. But perhaps every ten minutes is far too frequent. I now keep my inbox closed and just look at it every couple of hours, which allows me to focus on more important items. I’ve settled into a very specific daily routine during the work week: Wake between 6:30am and spend roughly an hour on my inbox; catch up on the day’s news; have breakfast, go to the office. Have a few meetings and check my inbox every couple of hours. Come home; put the children to bed; have dinner with my husband; and then decompress, compile blog ideas for the current month and then finally plan my next day in 5 simple ‘to-do’s.

In summary, as busy parents, I think we all agree we could benefit from less emails. Less spam and less promotional emails. So, when you’re thinking of sending that email, just take a moment to see if it might be quicker to give that person a call before pressing send.

The alternative to all the above is to just leave on your ‘out of office’ and they will soon get the message!