Curves are not second best

Curves are not second best 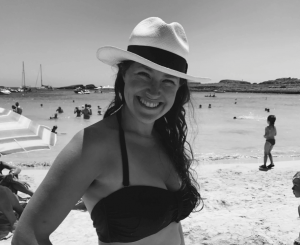 Many of us have a love hate relationship with our bodies. And, if you’ve ever stopped to think about your wobbly bits (I’m sure you probably have), then you are not alone. In fact, some 91% of women around the world claim that they hate their bodies. We are constantly at war with ourselves and someone with a voice is trying to send us a message to ‘stop’. Losing weight is a common new years’ resolution, but before you do, please pause and read this. Loving your body and putting the right fuel in your body is a lifestyle change, not just a new year fad, where it feels like you a punishing yourself all the time.

No new year, new me. Just a new year – embracing me.

Someone is trying to remind us to be kinder to ourselves, to love our amazing body and all our wobbly bits. This person is Taryn Brumfitt. Taryn’s body positive message has now reached over 100 million people worldwide via social media.

Australian documentary filmmaker, Taryn Brumfitt, is on a mission to change the way women see and feel about their bodies. She’s addressing these issues in her inspiring, social impact documentary, EMBRACE. She is also concerned that if we don’t change our inner dialogue with ourselves, what impact that could also have on how our children see their bodies. A study claimed that children as young as five have concerns about how their body looks, and 80% of 10-year-old girls have already been on a diet. It is a real concern.

Furthermore, according to research from Dove, did you know that eight out of 10 girls are so concerned with the way they look that they opt out of important activities? From playing sports and swimming to visiting the doctor, going to school or just offering an opinion, anxiety about their looks can keep girls from living life to the full.

Taryn would love us to accept our bodies and encourage our children to have a good relationship with theirs. In 2017, I got back into my bikini after a few years of hiding it under a swimsuit. And for what? Who cares? The only person who had an issue with my body – was me. So, I needed to change and be kinder to myself. These are the photos to prove it and I’m now confident enough to share them with you too.

So how did Taryn’s Body Image Movement story begin? While contemplating impending plastic surgery to improve her appearance post-pregnancy, Taryn had a body image epiphany. A mother of three children, she wondered how on earth she could teach them the fundamental human right of accepting and loving one’s body if she was uncomfortable in her very own.

In May 2013, Taryn Brumfitt made headlines worldwide when she posted a “before and after” photo of herself online, stating how much happier she is now than in her body-obsessed years. It went viral and on Facebook, she received more than 3 million “likes”. The “before” shot was from when she was in a body building contest, and the “after” was post birth. In the video, Brumfitt explains why she thinks the photo got so much attention. “Because heaven forbid a woman can love her body, after,” she said.

On 18th December 2017, I was invited along to Aimee Cooper’s home who runs a children’s cooking, craft and gardening workshops called Little Springers. Aimee asked if I would like to come and watch a special screening of Taryn’s documentary film, EMBRACE. I was delighted and accepted immediately.

The film itself is told from Taryn’s point of view as she travels the world speaking with celebrities, experts, and women in the street about their experiences. The film highlights the alarming number of body image issues that are seen in people of all body types. Combining footage from nearly two years of traveling, interviewing, and production, EMBRACE had its world premiere at the 2016 Sydney Film Festival. It was nominated for the Documentary Australia Foundation Award for Best Documentary and made it onto the festival director’s top 5 picks.

EMBRACE was such a moving and honest film about how we look at our bodies. I learnt so much from watching this documentary and was moved by the people Taryn interviewed, who all had their own fascinating and wildly different stories. There but were a couple of standout quotes that really stuck with me “thinner isn’t better” and that “curves are not second best”.

Congratulations to Taryn on what she has achieved with this film. I really hope the whole world gets to watch it. As a mother of two, I want my daughter to grow up knowing and appreciating what her body can do, not just what how big her thigh gap is.

Taryn – we salute you. So here we are. Happy new year to every…body!