A Trip to Historic Dockyard Chatham

A Trip to Historic Dockyard Chatham 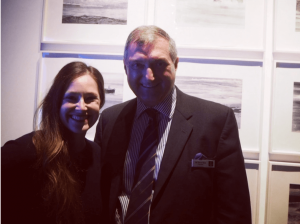 As a Kent girl, it’s been well overdue on my ‘to do’ list to visit Historic Chatham Dockyard. I have been meaning to come here for so many years.

I was so delighted when I received a personal invitation to the press day to mark the 400th anniversary of The Dockyard at its current location. To celebrate this milestone, an art exhibition, Powerful Tides: 400 Years of Chatham and the Sea has been curated by Jean Wainwright, who I had the pleasure of meeting on the day.

I went along and speak to the people involved in this exhibition and understand what it means to them. The exhibition is a celebration of the artists inspired by The Dockyard. It brings works together for the first time that celebrate not only the Dockyard but also reconnects it back to the sea, exploring the emotions that both Chatham and the sea have had on artists from the 17th century to the present day.

Over the centuries the Dockyard, the ships it built and the people who have built them have also been a source of creative inspiration. JMW Turner’s depiction of the Victory (launched at Chatham in 1765) at the Battle of Trafalgar in 1805 or his end of an era defining imagery of the Temeraire (launched at Chatham in 1798) being towed to the breakers yard in his painting of 1838, epitomise the power that the ships that Chatham built had. The words of Charles Dickens (whose father John worked at the Dockyard as Paymaster) in the Uncommercial Traveller captured the revolution in building ships in iron and the impact of those who worked on them. While the advent of submarines in the 20th century captured the imagination of a number of artists and some of the most striking works were created by Eric Ravilious in the early part of the Second World War.

As part of my visit to the Dockyard, I had the pleasure of interviewing Admiral Sir Trevor Alan Soar KCB OBE. He is the former Commander-in-Chief Fleet of the Royal Navy and current Chairman of Chatham Historic Dockyard Trust. He joined the Royal Navy in 1975, attending BRNC Dartmouth.

Sir Trevor told me how, from the age of fourteen, he was inspired and felt an overwhelming pull to ‘go to sea’; which is exactly what he did at the age of eighteen. By the time he was 29, Sir Trevor commanded the submarines HMS OCELOT (pictured below) from 1987 to 1990. He then commanded HMS TALENT from 1991 to 1994. He went on to command the frigate HMS CHATHAM from 1997 to 1998 and the aircraft carrier HMS INVINCIBLE from 2002 to 2004. A fascinating man to talk to.

As a father of two boys, Sir Trevor and I talked about how he often spent up to 100 days at sea away from his young family. It made he wonder and question how hard this must have been for both his wife and himself. We discussed this and he talked about how he now enjoys spending time with both his sons and his grandchildren. Making up for those lost moments, he hopes, makes him feel not too much of a of a ‘guilty grandfather’.

As a family man, I asked Sir Trevor about how his passion for working with Sea Cadets. He talked about how passionate he is about the platform the Sea Cadets can offer youngsters as it has all the foundations of a Royal Navy ethos. He talked about how the wellbeing of the UK’s teenagers is so important for them as individuals, and also for our country’s future. Sir Trevor believes strongly that by joining the Sea Cadets, many young people can grow their confidence, become brilliant team players and learn new skills – as well as leadership qualities.

It’s clear to see how passionate Sir Trevor is about life on the sea. In 2016, he became Chairman of Trustees at Chatham Historic Dockyard Trust and I was humbled to be shown round the exhibition by such an respected leader and gentleman.

It’s easy to think that the historic dockyard might not the the first place you will think of when you are planning a family day trip, but I promise you are in for a great surprise. Although I had attended the art exhibition alone, I genuinely can’t wait to come back with the family to explore this place even further.

Just 35 miles from central London, this is an accessible family attraction. It’s also incredible value – tickets are valid for 12 months – meaning once you pay you can go as many times as you like over the next year.

The Historic Dockyard Chatham is a fantastic family attraction celebrating all the best of Britain’s maritime heritage. There’s plenty of activates on all the time, so it’s well worth checking their website for what’s happening. Children can try out the hands-on exhibits demonstrating the various skills required of a seaman as well as exploring the decks of the Victorian warship. If you want to go into the depths of the 2,000-tonne, 24-torpedo submarine.

Pop down to the Dockyard this Easter as you won’t want to miss the Festival Fun at The Festival of Steam and Transport on 1st & 2nd April 2018. The Dockyard will be packed full of family fun with six vintage funfair rides, including a helter skelter, carousel and dodgems! Visitors will be able to ride all day on a variety of traditional fairground rides – all included in the price of entry to the event.

On a final note, Sir Trevor said that the toughest leadership role is being a parent and I couldn’t agree more. He now uses his leadership experience in support of Boards and key stakeholders of internationally focused organisations to meet the challenges of a global and increasingly complex marketplace.

In summary, I came away from the dockyard with mixed emotions. I felt humbled to have met Sir Trevor and to understand what this place means to so many people. If we all hope to raise confident and resilient children, then a trip to The Historic Dockyard Chatham is a great place to start.

For more information and to see what’s on, visit http://thedockyard.co.uk