Ferdinand at View from The Shard

Ferdinand at View from The Shard 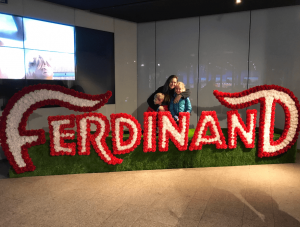 This may just be one of our favourite, heart-warming family movies of the year! From Blue Sky Studios, Ferdinand tells the story of a giant bull with a bigger heart. After being mistaken for a dangerous beast, he is captured and taken from his home. Determined to return to his family, he rallies together a misfit team for the ultimate adventure and proves you can’t judge a bull by its cover.

Originally published in 1936, The Story of Ferdinand is still heralded as one of the best pieces of American children’s literature there is. Written by Munro Leaf and illustrated by Robert Lawson, the story inspired Disney to produce an animated version in 1938, Ferdinand the Bull, which would go on to win the Academy Award for Best Animated Short.

Twentieth Century Fox Home Entertainment have teamed up with the city’s famous landmark, The Shard, to celebrate the iconic building’s ‘un-bull-ievable views’ and we were invited along to the launch. On arrival, we took the lift to the 69th floor, where the View from the Shard gives you the chance to soak in the spectacular 64km (40 mile), 360-degree view. The children loved seeing London from above. The launch, which including face paitning and some dancing was to celebrate Ferdinand making its way to Digital Download (from 10th April) and DVD from 16th April, so it’s available right now!

Director Carlos Saldanha keeps the heart of the story intact, even as the film progresses. The film opens in the Spanish countryside where we meet young Ferdinand, who is not like the other bulls. The other bulls fight to one day be chosen to fight the Matador. Ferdinand, however, is concerned with fighting in the ring and more interested in flowers, the cork tree and getting back his family.

This uplifting family comedy adventure with an all-star cast that includes John Cena, Kate McKinnon, David Tennant, Sally Philips, Gina Rodriguez, Anthony Anderson and many more. WWE superstar John Cena (who I randomly bumped into in a lift in a London hotel two weeks ago!) has been emerging as a natural comedian over the last few years. With roles in adult comedies such as Sisters and Trainwreck, Cena has demonstrated some muscular comedic chops to match his biceps., making Cena the perfect choice to voice the gentle giant, which is Ferdinand.

The visuals of the film are brilliant and BlueSky have done a fantastic job bringing so much colour and vibrance to the screen. In the iconic sketch of Ferdinand under the cork tree is made to look almost real, as if the audience could reach out and touch it. Every detail, down to the very last flower petal, was attended to. Blue Sky Studios, producers of iconic films such as Rio and the Ice Age series, pulled out all the stops for Ferdinand. This is a brilliant tale of the horned hero on his journey back to be reunited with his family, whilst be-friending a misfit team of friends along the way.

In summary, Ferdinand is a movie well worth watching. It has feel good factor is off the scale and will leave you feeling warm and fuzzy. In the Guilty Mother household, this movie is currently on repeat!