Meeting the cast of Call The Midwife

Meeting the cast of Call The Midwife 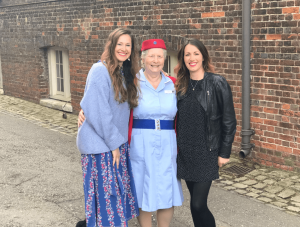 May 5 is the internationally recognised day for highlighting the work of midwives. ICM established the idea of the ‘International Day of the Midwife’ following suggestions and discussion among Midwives Associations in the late 1980s, then launched the initiative formally in 1992. As I’m sure you would agree, midwives are essential to the provision of quality of care, in all settings on a global scale. Not all mothers have access to a qualified midwife during pregnancy and labour. Today – we say thank you. To all the midwives around the world for their efforts to save lives of mums and babies.

So, considering the above…I have a confession. Call the Midwife is one of my most favourite programmes to grace the television. There’s something about this programme on a Sunday evening (after I have had my Countryfile fix), that seems to make everything right with the world. Sometimes it makes me smile, sometimes it makes me cry but whatever happens to these characters, I feel it. It felt so cruel that on Sunday 4th March 2018, Call the Midwife‘s Nurse Barbara died after contracting septicaemia. How could they? I sobbed on the sofa as I sipped my peppermint tea. Yes, this is my life.

But, as I wiped away my tears from this emotional storyline I was more concerned about when Call the Midwife would be summoned to my screen again. Please don’t make me wait until Christmas, I thought to myself.

Today…I bring good news. Call the Midwife is back. Now in its seventh year, Call the Midwife has not only captured my heart but the heart of over 10 million TV viewers who tune in to watch it. From Nurse Trixie Franklin to Nurse Phyllis Crane, Nonnatus House’s most experienced midwives return for series seven and we’ll see plenty of familiar characters: Reggie, Fred, Violet, Dr Turner, Shelagh and Sister Julienne, to name but a few. However, how many of us viewers knew that The Historic Dockyard Chatham is the backdrop for many of the show’s most iconic scenes?

A very exciting email arrived in my inbox last week saying “Jo, would you like to join us for the press day of Call the Midwife and meet some of the cast?” Oh, my days. The answer was yes. I was privileged to have a tour of the areas of The Historic Dockyard Chatham used for the filming.

Our tour guide, Irene gave us all a fantastic 90-minute tour of Historic Chatham Dockyard describing some of the areas where some of Call the Midwife’s most memorable scenes were filmed as well as some of the props, costumes and set used for the new series. Irene was extremely knowledgeable and passionate about Call the Midwife and the perfect tour guide.

During the tour, I also got to meet and chat to fellow Kent blogger, Sarah (Mum Muddling Through). It’s such a small world at times! Irene made the tour such a fun afternoon for us all. Every nook and cranny of this place is riddled with history and charm and she made sure we didn’t miss any of it. After the tour, we wandered into the beautiful walled garden of the Commissioners House before heading inside for afternoon tea and a special Q & A session with some of the Call the Midwife cast.

As the microphone wandered around the room for press to ask questions, I couldn’t resist asking Jenny Agutter OBE about ‘mum guilt’ and whether she felt it existed back in Poplar in the late 1950s and early 1960s. Jenny Agutter agreed that it probably did exist, but as many mothers had more children back then, caring for often six children in one household, she shared her thoughts on whether mothers had much spare time to worry about mum guilt.

As my question filtered across the panel, Laura Main (Shelagh Turner) added that in Call the Midwife, Shelagh Turner plays the modern mother very well as she cares for two young children, a step-son and still works at the surgery, as well as being a trained midwife. Not only that, but Shelagh Turner seems to hold everything together as a huge support for Dr Turner himself. How does she do it? Yes, perhaps Shelagh Turner is the epitome of a modern working mother, juggling balls all over the place.

At this point, Stephen McGann took the microphone to remind the audience of the strong female characters that appear in Call the Midwife. “To the woman who asked that intelligent question earlier about guilt…” he continued (err…. that was me – blush). Stephen McGann continued “in the programme, it rarely focuses on the men and if you watch closely, there are not many scenes with only men in it. The programme leans on the strong female characters which are central to its popularity. It shows so well how women coped and managed with so much in those times. There is no greater support system for women than other women on Call the Midwife, and that may be the secret to the series’ success.”

On that note, I ask – where would we be without the blessing of midwifery and all those who train in this field. Thank you to all the midwives and midwifery support workers around the globe for their hard work, commitment and dedication to provide safe, compassionate care for women, their babies and families.

Now, most importantly…when can we all go and live in Nonnatus House? I just want to sit round the table, have a cup of tea and an iced bun with Sister Julienne! Who’s with me?

For more information on the Call the Midwife ‘on location tour’ at The Historic Dockyard Chatham until 28th October 2018. By your tickets online now and get 20% off if you buy online by 7th May 2018.