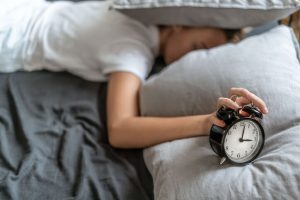 I think we could all agree that the Christmas break was a good time to have a lie-in. Oh yeah. I spoke to so many people in early January about the festive break and how it had given them time to ‘slow-down’ and stop rushing around for a short while. I was definitely guilty of that. For ten days, there was no need to jump out of bed in the mornings, which felt like pure bliss. I would wander downstairs, make myself a small coffee and bring it back upstairs whilst I climbed back into bed again to watch the morning news. Amazingly, I wasn’t shouting the words ‘shoes’ or ‘teeth’ to anyone.

However, whilst I love a little lie-in (just thirty minutes will do), my husband is the opposite. Perhaps it is in his DNA, but he needs to be up and out of bed by 7am. According to an interesting study published by the Journal of Clinical Endocrinology and Metabolism, a longer sleep can be great for our health. However, for men, a longer sleep could have the opposite effect, actually causing more harm than good for their health.

Research showed that women who enjoyed a lie-in could see a lower risk of diabetes, while men who enjoyed pressing the snooze button on their precious sleep could see an increased risk of diabetes. Dr Femke Rutters, from the VU Medical Centre in Amsterdam explained: ‘In a group of nearly 800 healthy people, we observed sex-specific relationships between sleep duration and glucose metabolism. In men, sleeping too much or too little was related to less responsiveness of the cells in the body to insulin, reducing glucose uptake and thus increasing the risk of developing diabetes in the future’.

As women, we know that multi-tasking can be mentally and emotionally draining. Could this be the reason why women need more sleep than men? According to researchers at the Loughborough University U.K.-based Sleep Research Center, women do use their brains more than men – so much more so that, yes, they do require more sleep. In an interview with the New York Post, the director of the U.K. Sleep Research Center, Jim Horne, explains: “Women’s brains are wired differently, so their sleep need will be slightly greater. Women tend to multi-task—they do lots at once and are flexible, and so they use more of their actual brain than men do,” Horne says.

In another study highlighted in The Independent, scientists found that around 20 minutes more sleep was needed by women compared to men – and said this was thought to be because the female brain works harder during the day.The study was carried out on a sample set of 210 middle-aged men and women. “One of the major functions of sleep is to allow the brain to recover and repair itself,” study author Jim Horne, a sleep expert formerly director of the Sleep Research Centre at Loughborough University, told the Mail Online.

So, there you have it. According to the experts, my thirty minutes extra nap time is important and is a key aspect of women’s health. Amen to that mamas. So while you are at home debating with your partner about who would get up first and get the kids their football or rugby clubs, just remember – ladies…we officially need a little extra sleep!

The whole thought of this is making me sleepy already…