As a country girl myself, I grew up in farmhouse surrounded by woods and streams. I consider myself lucky to have grown up in such a natural environment which meant my brothers and I were constantly outside exploring and covered in dirt. We would probably be out all day and we only came home when we were hungry. It was normally the responsibility of my eldest brother to ensure that all three of us arrived home safely. Was your childhood a similar story to mine?

We would be on our BMX bikes in the woods, hanging on a rope swing or searching for frogs by the stream. We spent many summers in Wales, exploring the wonder of the Brecon Beacons. I probably spent years moaning that I was tired and didn’t want to do it, but actually now, I cherish those times. Being outside amongst the best that nature has to offer was a wonderful experience and continues to be so. As a parent myself, I can only hope that my children can enjoy this beautiful landscape as much as I have. So, it would only be natural that I would want to take my children to Brecon to explore the same paths that I did as a kid. So this idea got me thinking. What responsibility do I have to try and show the children why the outdoors is the biggest playground they will ever experience in their life? 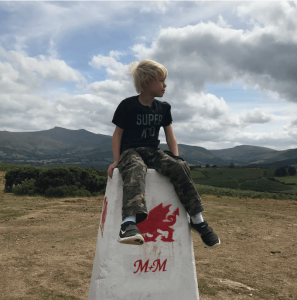 However, in modern times, things seem to be changing; and not for the better. In a recent study published in The Sunday Times, children in Britain spend just 16 minutes a day playing or exploring in parks and other open spaces, according to a detailed new study. The figure, an average of time spent outdoors in parks, the countryside, the coast or seaside, includes excursions at weekends as well as weekdays. Among children in their mid-teens it drops to ten minutes per day as younger children, aged between eight and 13, spend more time playing outdoors.

Boys were much more likely than girls to spend longer playing sports. Girls spend more time on average than boys playing with household pets or gardening, but in every other category were significantly less active than boys. It is so sad to read that overall engagement with outside rural spaces is low in the modern age. In fact, A study published by the National Trust two years ago suggested that children were spending around half the time that their parents did playing and exploring outdoors. Research by Natural England, a government agency, published in 2016 found that 1.3 million children or 12 per cent had not visited the natural environment for a year.

But it’s not just a UK phenomenon. A study by the Seattle Children’s Research Institute appearing in the Archives of Pediatric & Adolescent Medicine discovered that almost 50% of preschoolers lacked even one parent-supervised outdoor play session per day. On average, children aged 10 to 16 now spend only 12.6 minutes a day on vigorous outdoor activity compared with 10.4 waking hours being relatively motionless.

Why aren’t children playing outside?

Of course, technology and TV entertainment is going to be a key factor. Children are bombarded with new entertainment mediums, from more established tech like TV and film to cutting edge games, social media and mobile phones. There are more diversions than ever to occupy the minds and time of children. But it would be way too simplistic to say that everything is the fault of the rise in new media. But, when I think of this with a holistic approach. It’s not just the kids. Adults are being bombarded with information all the time too. From 24 hour news, to the constant pinging of emails and notifications, it is no wonder so many of us are at risk of burnout.

Being a woman in tech, I am not ashamed to say that my kids have tablet devices (guilty). Sometimes, much like us, they consider watching their gadgets as a way to unwind. The important part I suppose, in my own opinion as a responsible adult is to control how long they are on their devices for and when to say ‘that’s enough! We are going outside!’. As with many things in life – it is a question of balance. It is about breaking up habits. Knowing when to go outside and when to come inside for a rest. We need to help to educate our children to make decisions on switching up their activities to give them variety in their day. 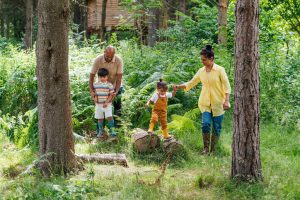 3 Top Tips for Getting Kids Outdoors

While getting outdoors with your kids isn’t easy, it’s always worth it. You’ll rarely regret making a commitment to getting outdoors more. Your children will benefit in ways you never imagined or expected. There are lots of forest schools and outdoor adventure activity weeks your children can join over the summer holidays, so do have a look online for ones near you. Last year, my two children did a week long bushcraft activity week and they absolutely loved it!

If you want to incorporate more time outdoors in your day, start small. Perhaps the kids could have a picnic tea outdoors (maybe at a nearby park or recreational ground after school – two days a week). I know this isn’t always practical with work and with after school clubs to consider, but if you can find the gaps to do it – please give it a try! Your children’s imaginations and creativity will surprise you when they’re outside with “nothing” to do and have to come up with something clever to play.

Set up playdates with friends outdoors and let the kids explore together. Take turns checking out new parks, new trails or new activities. Sometimes just making plans and having accountability can encourage you to get out of your comfort zone easier.

The good old British weather never fails to surprise us, so make sure you take a backpack with spare clothes, snacks, wipes and water. Plus, don’t forget to include binoculars and magnifying glass for your little explorers. Keep it stocked and by the door ready to go when you are.

Hopefully after reading this, you’ll be feeling a little more ready for your next adventure. If you are looking for some fun, traditional ideas for outdoor play, just like we did as kids, the National Trust have put this brilliant guide together of fifty things to do before your11¾’. From tree climbing to den building via stone skimming and kite flying, you’ll find something that’s ideal for your children.