What we learnt from the Women’s World Cup

What we learnt from the Women’s World Cup 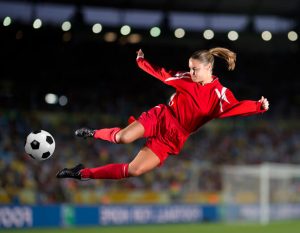 After the Women’s World Cup attracted a record TV audience total of 28.1 million in the U.K., the game should be ideally positioned to capitalise on this all-time high interest in a burgeoning sport. While participation in women’s football has steadily risen over recent years, there are still numerous barriers to break down and obstacles to address in giving more women more opportunities to play.

An example is Hackney-based women’s football side Goal Diggers FC, who initially struggled to book pitches when they were formed around four years ago. Despite a membership that is now nearing 200, it took direct intervention from Playfinder, a digital booking service for sports facilities, to ensure the team had a regular place to train twice a week. According to a survey conducted by Playfinder, formerly MyLocalPitch, around 40% of women aged 16-34 were keen to play football, but more than half were wary of participating in a sport viewed as male-dominated.

Sport is powerful, which is why we need to work hard to introduce more girls to grassroots sports by giving them equal access to facilities and by investing our marketing and campaigning efforts in promoting women’s sports. This year’s Women’s World Cup, along with the success of Women’s rugby, cricket and netball have seen an incredible uplift in interest from girls which is incredible. But, we need to keep this momentum going.

You might be wondering why this is so important but we must never undervalue the importance of sport for girls. Its benefits on physical and mental health and well-being are well documented – but for young girls, the statistics show that sport can be daunting and unappealing. According to, ‘State of The Nation: Teenage Girls and Sport Quantitative Report’, a major study commissioned by Lidl, sport has a positive impact on mental health.

The report examined how playing sport affected teenage girls and how prevailing attitudes can impact on their ongoing participation. The study talked to female teens and their parents to determine the part that sport can play in their lives. One of the striking findings was the way that playing sport could boost girls’ happiness and confidence among the 12 to 17 age group. 61% of girls who played sports said they had high body confidence, as opposed to 42% who didn’t play sports. Girls who didn’t play sport were four times more likely to have low body confidence than their sport-playing peers.

Girls who played sport also returned higher ratings for their mental well-being. Girls that played sport were less likely to feel lonely, to get depressed or to feel bored. 68% said they felt happy on a daily basis as opposed to 48% of girls who didn’t play sports. As well as mental health, through sports, girls learn important life skills such as teamwork, leadership and confidence.

When the Women’s World Cup concluded on 7th July 2019, a significant milestone was broken. Close to a billion had tuned in worldwide. Not only is this good news for women’s sport it is also wonderful news for our next generation of sports women.

Despite earning much less than their male players–an estimated $370 million pay gap for the FIFA World Cup winners in the U.S.–female players have been very eager to give back. “Women are always at the forefront of all this kind of stuff, racial inequality or pay inequality, maybe because we’re always having to fight for something and we truly understand what gender discrimination looks like and pay inequity looks like. It’s very close to home for us,” said Megan Rapinoe in a previous interview with the Guardian.

In summary, we recognise that sports’ women over the years have helped to pave the way for future generations of women and girls, but I know there is much more to do. By sharing modern success stories like the achievements and sporting excellence at the Women’s World Cup, we can inspire more girls to play more grassroots sports today, tomorrow and beyond.