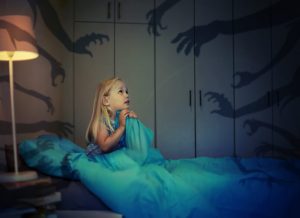 I am unsure if it’s something to do with back to school, but I’ve recently been speaking to several friends whose children have been suffering with night terrors. A night terror is a sleep disruption that seems similar to a nightmare but is far more dramatic. During these episodes, quite often parents will try to wake their child by rubbing their back and calling their name. However, sometimes even this doesn’t work. Episodes of night terrors will typically last a few minutes and can feel alarming for parents who witness them, though they’re not usually cause for concern or a sign of a deeper medical issue.

If it was a nightmare, you could wake them up and give them hugs and tell them everything’s O.K. and they’d realise that they’re O.K- but the frustrating thing with a night terror is that often you can’t do that. The positive news is that typically, kids who experience night terrors don’t remember the episodes at all.

What Are the Signs and Symptoms of Night Terrors? During a night terror, a child might:

Science does offer clues, however, to common triggers for these episodes and appropriate ways for parents to handle them. About 25 minutes after falling sleep, the adult brain cycles from light sleep to deep sleep. During the deep sleep phase, heart rate and breathing slow and it’s difficult to wake up. While children pass through this phase, they sleep more deeply than adults, which means they’re even harder to wake, and they stay in deep sleep longer, said Dr. Rafael Pelayo, M.D., a clinical professor in the Division of Sleep Medicine at Stanford University. Night terrors occur during this deep sleep stage, generally during the first half of the night. During these episodes, some parts of the brain, including the limbic system — which helps regulate the body’s sleep-wake cycle, among other functions — stay in deep sleep while the parts of the brain that operate movement and motor functions transition out, creating a situation where the child is “caught in between the awake world and sleep world,” Dr. Pelayo said.

The reasons this happens aren’t entirely clear, said Dr. Haviva Veler, M.D., director of the Pediatric Sleep and Breathing Disorders Center at NewYork-Presbyterian Hospital/Weill Cornell Medical Center. Night terrors are hereditary, meaning that your kids are more likely to have them if you did. Some researchers theorise that, for children who are already genetically predisposed, normal brain development may trigger these episodes.

Pediatricians generally agree, however, on how parents should handle night terrors. First, don’t try to wake your child while they’re experiencing one. Since night terrors occur when deep sleep is disrupted, trying to wake your child by shaking them or talking to them can disrupt deep sleep even more, causing “agitation and confusion” in the moment and potentially throwing off the next night’s sleep cycle, which can increase the likelihood of another episode, Dr. Veler said.

According to some experts from research I have read, a parent’s greatest weapon in the fight against night terrors is adequate and consistent sleep. The Centers for Disease Control and Prevention recommend that toddlers aged 1 to 2 get between 11 and 14 hours per day (including naps); preschoolers aged 3 to 5 should get 10 to 13 hours; and kids between 6 and 12 should sleep nine to 12 hours daily. Getting adequate sleep on a regular schedule resolves “a significant majority” of night terror problems, Dr. Relia said, and increasing sleep duration by just 15 minutes by making bedtime earlier or waking children later “can make a significant difference.”

There’s no treatment for night terrors, but you can help prevent them, with these five top tips:-

For most families, the good news is that night terrors tend to vanish as children grow. In the meantime, it can be helpful to connect with and seek comfort from other parents who are going through the same thing so talk to other parents who may have experienced something similar. Either way, the likelihood is that, as a parent, you are not alone.