How to Manage Impostor Syndrome

How to Manage Impostor Syndrome 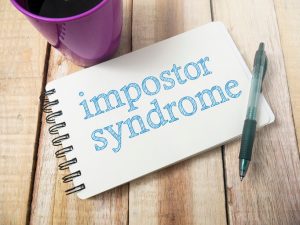 According to the international Journal of Behavioural Science, some seventy percent of people are affected by imposter syndrome. We all get it – men and women. Someone says something, or you attend a meeting and it all goes over your head and suddenly you feel like a right fool, in completely the wrong place and company. It makes you feel unworthy. All of sudden you feel the invisible neon sign flashing over your head saying ‘you are not up to this job’. However, those feelings of the neon flashing sign over your head are not unusual. So I ask, why is it the case that we have only just started to openly talk about the subject?

In April 2019, I went to The O2 in London to see Michelle Obama address an audience of some 15,000 people as part of her ‘Becoming’ book tour. Michelle said that she always dreamt big. She said “every step of the way there was always someone telling me I was too loud, dreaming too big. And I had to learn over the course of the year, or my lifetime, that I could either succumb to that and wither away, or I could become steely and say I’ll show you.”

During the book tour, Obama spoke about her experience facing impostor syndrome and made an eye-opening revelation about what helped her ease her insecurities. “I still have a little impostor syndrome. It doesn’t go away, that feeling that you shouldn’t take me that seriously. What do I know? I share that with you because we all have doubts in our abilities, about our power and what that power is,” Newsweek reports her saying. Obama said young women have to push the “demons out of your head,” revealing that she too asks herself if she’s “good enough,” Newsweek reported. Obama noted that women internalise this doubt from an early age, adding that this feeling is especially pertinent among women of colour.

Michelle offered this “secret” for women across the board: “I have been at probably every powerful table that you can think of, I have worked at nonprofits, I have been at foundations, I have worked in corporations, served on corporate boards, I have been at G-summits, I have sat in at the U.N.: They are not all that super smart.” The candid nature of the former first lady’s book has resonated with many, but in comments like these during her tour, she has made it crystal clear that there’s more room for young women in high places than they might initially think.

Sheryl Sandberg learned that both “confidence and leadership are muscles”. In the wake of the untimely death of her husband, the author of Lean In and COO of Facebook admitted to hitting a confidence low. Her friend, Adam Grant, an author and professor at the Wharton School, gave her advice that would ultimately change her thinking. “He suggested that every night before bed I write down three things I did well that day,” she explained during the 2015 Grace Hopper Celebration, as reported by Forbes. “I tried to do this, although some days I had such a hard time thinking of anything I did well that I’d end up listing ‘Made a cup of tea.’ But over time, focusing on things I’d done well helped me rebuild my confidence. Even if it was small, I could record something positive each day,” she said.

“Confidence and leadership are muscles,” Sandberg continued. “You learn to use them or you learn not to. If you are afraid to speak up at a meeting, every time you force yourself to do it, you get better at it. If you’re afraid to take your seat at the table, every time you take your seat at the table and you realise no one tells you to go get back to the back row, you learn to do it.”

As a mother of two, I know we need to teach our kids the concerns of perfection. Don’t always think you are perfect and brilliant. We all have strengths and weaknesses. We just need to identify and embrace them more. Self-doubt is often the thing that drives us to try to improve ourself. For example, I remind my kids, if they are anxious perhaps before a race, a class test or a school performance, that’s a good thing. Being anxious before you start means you care – that you want to do your best.

Here are 5 top tips for rewriting the rules of Imposter Syndrome:-