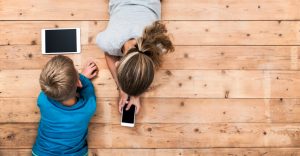 My ten year old daughter announced this week that she knows what she wants for her eleventh birthday. “Oh yes, what’s that sweetheart?” I replied. “my own mobile phone” she exclaimed. To be clear, being a woman in tech, I am surrounded by mobile phones every day. My daughter cannot sometimes comprehend why I work with huge, global organisations including Apple and Telefonica O2, but somehow…she doesn’t have a mobile phone.

As a parent, I remind her that she is ten years old and she really doesn’t need a mobile phone. Part of me wants to keep her away from one for as long as possible. I hear so many parents saying that once you put it in their hands it can often feel impossible to tear it away. However, I should clarify that from my perspective, I don’t always see mobile phones as something that is bad or poisonous for children. For social media too, I see the good and the bad. For many children, social media is a hugely important part of how they connect with their friends. Social media can help shy kids connect. It has opened up a world of useful information, aids research and school work, gives a sense of achievement. Social media used for good can be a hugely powerful and positive place.

Many of us grew up in an age of no mobile phones… of books (Judy Blume) magazines (Smash Hits) and long chats on the home phone (talking to school friends we had already been with all day). Those times are gone. In a world now dominated by social media and documenting our lives online, growing up in the1980’s now seems a world away. Many, messy nights out and parties from the 90’s are not documented online – thank goodness.

My daughter vaguely knows what Instagram and Snapchat is. Not of course that she has an account of her own, but she is free to look through my Instagram feed on my phone if she wishes. I don’t hide things from her. My Instagram feed is purely curated to be uplifting and positive in a number of ways. I don’t post photos I feel would embarrass my kids. In my view, that’s not what it is for. Many of us use social media as a crucial tool to build networks and sales opportunities. In fact, many of us use it as a portal to make money. This then makes it more difficult to tell our children to get off social media, when we are regularly updating our own feeds.

A Childwise report found that children are getting mobile phones at an earlier age, with most now having their own phone by the age of seven. The average time spent on mobiles by seven to 16-year-olds is three hours and 20 minutes per day. So what are children doing on their mobile phones? From listening to music to messaging their friends, many are spending time watching entertainment or getting information. The mobile phone is the main online gateway for most young people. In fact, YouTube (inc. YouTube Kids) remains dominant, used by 61% of children every day, mostly on mobile phones.

In shocking figures, more than half of children say they sleep with their mobile phone beside their bed, according to an annual survey of young people’s use of media. The survey, based on interviews with 2,200 children in the UK aged five to 16, shows the pivotal place of the mobile phone in young lives. There are 57% who always have the phone beside their bed and 44% who feel “uncomfortable” if they are ever without a phone signal. There are 42% who say they keep their phone on them at all times and never turn it off. Even though the average age of owning a phone is becoming younger, the step up to secondary school at the age of 11 is still the point at which many children get a phone and ownership becomes “almost universal”.

For parents, research director Mr Leggett says the combination of mobile phones and internet access can make it difficult to know what children are watching. “The moment a child owns a mobile phone, it can be a challenge to monitor what your child is accessing online because it’s such a private technology that most keep literally close to their chest,” said Mr Leggett.

Noël Janis-Norton, a parenting coach and author of Calmer, Easier, Happier Screen Time, says parents need to set their own guidelines, and wean their children away from screens gradually. “If a young person is in front of a screen for six hours a day, then getting it down to three hours is a huge achievement. I recommend focusing on times of day; for example no screens before school, no screens at mealtimes, no screens at bedtime.”

For many parents and caregivers, getting the devices away from our kids is the hardest battle. Janis-Norton says: “When parents are firm and consistent, young people respond well. They will be upset, but they get over it, and start to read, spend more time with their friends, write stories, walk the dog…” It would seem that the more you talk to your children about your reasons for limiting their phone and computer use, the easier it will be. And try to do it early; the older they are, the harder it is to enforce limits.

How can we use technology to monitor what kids are doing on devices?

Innovations are popping up all the time to help parents control screen time. As a good example, the Izzy J platform, is for families who want to provide the ultimate in security and protection for their young ones.

From your child’s first phone/tablet, to giving them a device before going to school, we cater to all circumstances. We encrypt the device from the route level and provide a shield to the un-wanted content of the internet. A secure Izzy J digital licence has a fully developed Fun Store with all the apps your child could need from 4 – 16 years of age. We have chosen specific apps from Games/Education and Wellbeing, as well as all the schools apps for secondary school.

In summary, for children today, they are part of a digital generation. A generation which is growing up surrounded by technology and the internet. You can’t take something away which surrounds them as part of their normal day to day life. They use technology at school, at home and pretty much – everywhere they go. There are some remote places we can take them to go “off-grid” but those places are hard to find. We can’t change the world that our kids find themselves in, but we can help them navigate it as well as teaching them how to use it in a positive and wise way.