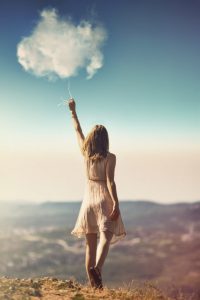 I used to have an old reoccurring dream as a child. I was in space (no space suit of course). I was on a slimline red carpet that was uneven and as I walked along it, objects kept trying to tip me off the carpet into the black unknown.

I would be ducking my head to avoid some bizarre objects including saucepans and frying pans clambering across the black space trying to push me off the wobbly carpet. I always managed to hold my nerve. I felt strong until the ultimate test come along which was always near the point of me waking up. An old fashioned vacuum cleaner (an 80’s one) driving along the carpet leaving me very little space to move out the way. Before I fall off the carpet into space – I wake up. It happened repeatedly for years. But what an earth does it mean? And why do some people remember their dreams and some have no recollection at all.

Dreaming is a universal, enduring aspect of being human (though not limited to humans, since animals dream as well). Dreaming is something we do daily from the time we are very young to very old. Are dreams more than a nightly de-cluttering of the mind? Are there ways that dreams might help us live better? There is a long-held view of dreams as a creative portal—and scientific study may be giving that belief some credence. Evidence suggests that dreams may assist in daytime function and performance, especially as they relate to creativity and problem solving.

Many scientists studying sleep and dreams believe that dreaming does have a purpose. But what makes us dream? Roughly, the cause may be divided into two classes. Dreams may be caused by reflex action of brain cells, impressions made during the day being distorted, or are imprinted so strongly on the mind that even in sleep the events are lived through again.

I used to love talking to my mother about my dreams. It’s something that we shared a real passion for. So much so, that I recall her giving me a book called ‘Dreams and Omens’ by James Ward when I was around fourteen years old, so when I had a dream, if I remembered it, I could look up it’s meaning. I still have that book now. However, trying to look up space related dreams on a red carpet, surprisingly, nothing came up!

Dreams provide us with insight about what’s preoccupying us, troubling us, engaging our thoughts and emotions. Often healing, often mysterious, always fascinating, dreams can both shape us and show us who we are.

In another strange dream, which was, perhaps, a fraction more morbid. I used to see myself at my own funeral. I could see myself being lowered into the ground. I remember looking up to see who had bothered to come to my funeral. To my surprise I remember seeing a few ex-boyfriends there and thinking in my dream ‘oh that’s funny. I didn’t think he would turn up’ and I woke up feeling assuringly loved. It’s quite odd seeing yourself at your own funeral. Well, at least I didn’t need to organise any food for the buffet afterwards, that was someone else’s job! Contrary to how morbid the dream may seem, according to my trusty book from my mother, a funeral means ‘a successful love affair’ and so all was good in life.

Testimonies from creative people and contemporary scientific research suggest that dreams are a creative landscape for the mind. One study of musicians’ dreams found that not only did they dream frequently of music, but nearly half of the music they recalled from their dreams was unfamiliar and novel to them, an indication that composing is possible in dreams. Paul McCartney famously credited the composition of The Beatles song “Yesterday” to a dream. Other artists, from the poet William Blake to the filmmaker Ingmar Bergman, have claimed to rely on dreams for creative inspiration and guidance.

Sadly, my husband never remembers his dreams. I feel for him. He is missing out on so much. Hoovers and funerals. Such a shame. Have you had any bizarre dreams that you remember? I would love to hear your stories. Comment on the Guilty Mother Facebook page.