A small step for women, a giant leap for womankind

A small step for women, a giant leap for womankind 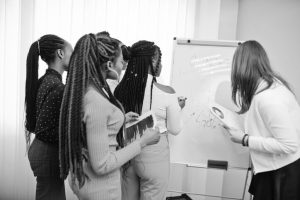 Members of the Kennedy Space Center government-industry team rise from their consoles within the Launch Control Center to watch the Apollo 11 liftoff through a window. JoAnn Morgan is seated to the left of center in the third row. Credits: NASA

Apollo 11, way back in 1969 saw the ‘giant leap for mankind’, and in the celebration of the first moon landing and Earths greatest men it’s easy to miss the women in on the mission. JoAnn Morgan, Aerospace Engineer was celebrated this week alongside many other women contributories to the rocket launch all those 50 years ago.

Her career at NASA spanned over 45 years, and she continued to break ceiling after ceiling for women involved with the space program. JoAnn Morgan was the first female senior executive stemming from her role of first female launch controller. She secured the job in Alabama and is actually the only female present in the famous Apollo 11 control room picture.

Neil Armstrong was the main man, all eyes on him as he landed on the moon and planted the flag- but would he have achieved where he was then without the help of behind-the-scenes Judy Sullivan, biomedical engineer and the only woman who suited up Mr Armstrong for the mission. Sullivan was the lead engineer for the mission and ensured the astronauts were healthy enough for the flight. Judy showed courage and ambition “I think I have a strong sense of adventure and I wanted to do something more.” Encouraging others, she says “Be adventurous, don’t let anyone convince you you can’t make your goals”.

Ahead of the game even at school, skipping several grades and attending high school aged 13, Katherine Johnson was known as the “human computer” by her peers and soon for the national advisory committee for Aeronautics, the agency which became NASA in 1958. Aerospace technologist Johnson calculated launch windows, trajectories and backup return paths for NASA flights, including Apollo 11. Awarded the Presidential Medal of Freedom aged 96 by Obama for her 33 years hard work with NASA Johnson claims she “loved going to work every single day”.

“I plan on being an engineer at NASA, but I can’t do that without taking them classes at that all-white high school, and I can’t change the colour of my skin” says Mary Jackson, before becoming the first African-American female engineer for NASA, and at one point, the only African-American female engineer working in the world. Mary Jackson specialised in boundary layer effects on the aircrafts of NASA. Encouraging and inspiring others, Mary spent time building a wind tunnel for the students of Virginia to allow for experiments and interest in science.

Heard of the term ‘software engineering’? Well this term was credited by Margaret Hamilton, computer scientist leading NASA’s team of software engineers and director of MIT Instrumentation Laboratory. With no software bugs ever known to have occurred on any Apollo mission, Hamiltons approach was very successful and she too was awarded with a 2016 Presidential Medal of Freedom by Obama.

Morgan says she is excited about seeing more women involved with the upcoming Artemis missions to return humans to the Moon and eventually make it to Mars. In a statement on the NASA website, Morgan says “I hope that photos like the ones I’m in don’t exist anymore.” And she’s right. We need to see more women in the room, not just one.

To me, Morgan is an inspiration for women and girls in STEM all over the world. If women back then didn’t demonstrate their courage, determination and ambition where would we be today? – perhaps not yet on the moon and beyond.