Family Movies to Watch in 2020

Family Movies to Watch in 2020 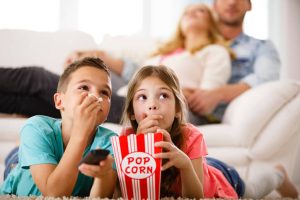 It’s always a treat to head to the movies, grab a tub of popcorn, and watch a movie together with the kids. For parents, this can also prove to be a treat. You night even sneak in a power nap – you know you want to! 2020 has a lot in store when it comes to fun, family movies. I’ve compiled a complete list of the best kids’ movies coming out in 2020 that will be worth a trip, so grab your calendar and mark the dates for these new children’s movies

Dolittle is a kid-friendly adventure comedy starring Robert Downey, Jr. as a doctor who can communicate with animals. It diverges from author Hugh Lofting’s original book, “The Voyages of Doctor Dolittle” (as well as previous movie adaptations from 1967 and 1998) into its own story. Here, Doolittle is a hermit following the death of his wife, who was a brave explorer.

While the overall story is told in the spirit of fun and adventure, the movie deals with themes of loss and abandonment, overcoming grief through helping others and finding a family among friends. While communication, compassion, and teamwork are all on display, there’s also plenty of animal bottoms and farts, which is sure to get a laugh from its younger audience.

The Call of the Wild

Adapted from the beloved literary classic, THE CALL OF THE WILD vividly brings to the screen the story of Buck, a big-hearted dog whose blissful domestic life is turned upside down when he is suddenly uprooted from his California home and transplanted to the exotic wilds of the Alaskan Yukon during the Gold Rush of the 1890s.

As the newest rookie on a mail delivery dog sled team–and later its leader–Buck experiences the adventure of a lifetime, ultimately finding his true place in the world and becoming his own master. Featuring Harrison Ford and Karen Gillen, this adventure movie looks set to be a pure delight. We’re in a Golden Age of movies for dog-lovers right now (remember A Dog’s Purpose and A Dog’s Journey?), so if your kid loves animals, make sure to put this one on the calendar.

One of the biggest upcoming Disney movies is Onward, an action adventure comedy that is all my kids are talking about lately! They can’t wait to see these adorable elf creatures searching for magic. With Chris Pratt as the voice of Barley Lightfood, Octavia Spenser as the voice of Manticore, and Julia Louis-Dreyfus, this movie looks lighthearted and funny.

Set in a suburban fantasy world, Disney and Pixar’s Onward introduces two teenage elf brothers who embark on an extraordinary quest to discover if there is still a little magic left out there. Pixar Animation Studios’ all-new original feature film is directed by Dan Scanlon and produced by Kori Rae, the team behind Monsters University.

Anna Kendrick and Justin Timberlake return in an all-star sequel to DreamWorks Animation’s 2016 musical hit: Trolls World Tour. In an adventure that will take them well beyond what they’ve known before, Poppy (Kendrick) and Branch (Timberlake) discover that they are but one of six different Troll tribes scattered over six different lands and devoted to six different kinds of music: Funk, Country, Techno, Classical, Pop and Rock. Their world is about to get a lot bigger and a whole lot louder.

A member of hard-rock royalty, Queen Barb (Rachel Bloom), aided by her father King Thrash (Ozzy Osbourne), wants to destroy all other kinds of music to let rock reign supreme. With the fate of the world at stake, Poppy and Branch, along with their friends – Biggie (James Corden), Chenille (Caroline Hjelt), Satin (Aino Jawo), Cooper (Ron Funches) and Guy Diamond (Kunal Nayyar) – set out to visit all the other lands to unify the Trolls in harmony against Barb, who’s looking to upstage them all.

Mulan is the epic adventure of a fearless young woman who masquerades as a man in order to fight Northern Invaders attacking China. The eldest daughter of an honoured warrior, Hua Mulan is spirited, determined and quick on her feet.

When the Emperor issues a decree that one man per family must serve in the Imperial Army, she steps in to take the place of her ailing father as Hua Jun, becoming one of China’s greatest warriors ever. Mulan stars Donnie Yen, Jason Scott Lee and Jet Li and will be directed by Niki Caro.

The film is a sequel to 2018’s Peter Rabbit and is based on the stories of Peter Rabbit created by Beatrix Potter. The film stars the voice of James Corden as the title character, alongside Rose Byrne, Domhnall Gleeson and David Oyelowo in live action roles, and the voices of Daisy Ridley, Elizabeth Debicki and Margot Robbie.

As far as the plot line goes, Peter can’t seem to shake his reputation for mischief among the other rabbits. Once he adventures out of the garden Peter finds himself in a world where mischief is appreciated, but soon his family come to bring him home.

If you’ve got book lovers at home, this is one of the 2020 new film releases for you. Starring Colin Firth, Julie Walters, Amir Wilson and Maeve Dermody, this is a stunning adaptation of the best-selling kids’ novel of the same name by Frances Hodgson Burnett. The Secret Garden tells the story of a young orphan girl, who unveils the secret of a mystical garden, hidden in her uncle’s estate.

Minions 2: The Rise of Gru

Everyone loves Minions. Your kids think they’re hilarious. Your aunt loves to post memes about them on Facebook. It’s hard not to succumb to their babbling charms. This movie continues to explore the backstory of how they teamed up with the villain-turned-nice-guy Gru.