Pants down for Security…

Pants down for Security… 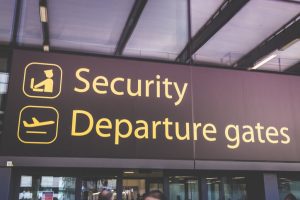 Guilty Mother followers. I salute you. Friday is here and I was so overjoyed to reach 1000+ followers on my Facebook page in just seven days, I wanted to post a funny blog to say thank you. Every time I reach another major milestone, I will post, what I deem as a funny blog.

So here it goes….It was October 2015 and we had been enjoying some much needed winter sun in Tenerife. It was glorious. We had packed up the car and made our way to the airport as normal for our flight home.

As we reached the airport around mid morning, we checked in and zig zagged our way through to security control and departures, just like any other flight. I’m sure we go through these moments on auto pilot, emptying liquids and pockets with coins and bits of paper. As a desperately unpack the iPads and smartphones from the rucksack, we stood and queued for the trays. It was busy. It’s always busy on changeover day, but we were not in a rush, we were relaxed.

As we made our way to the front of the queue, my husband had gone through the scanner first with our daughter, while I was a few people behind, as two busy queues had merged into one line.

As I stood and collected a plastic tray and started to pop everything into the tray. I was asked to remove my shoes…and my belt. Then something happened. It is almost too traumatic for me to even write this as I re-live what occurred in those 30 seconds…but it happened. In a blink of an eye, whilst holding the tray with both hands, my trousers had become loose from the lack of belt, my son had pulled my trousers (and my pants) down with some force. This seemed to happen in slow motion as I looked down to see – I was exposed. I quickly put the tray down as I desperately tried to recover any dignity I had left. I still had one problem though. As I bent and squatted to yank my trousers back up, my son was still holding onto them laughing, so I was mooning all the people behind me in the queue. Up and down. Up and down.

I managed to get my trousers up on the third attempt and made the decision not to turn around. I could not bear to turn and look at all the people who had been behind me in the queue. I swiftly grabbed my son’s hand and tried and get through security as swiftly as possible. However, I was not out of the woods yet, we now needed to walk through the scanner.

My son went first and I followed. As if I hadn’t been embarrassed enough, as I went through the scanner and the buzzer went off. The security lady asked me to hold out my arms while I was checked. I quietly said to myself “I think everyone has seen quite enough”. It was obvious that I was not hiding anything suspicious in my undergarments.

When I finally made an appearance at the other side of the security checks, my husband looked at me and said “you were a while. Everything ok?”. I must say, for someone who is quite vocal and generally chatty, I was very quiet. I could hardly get my words out to explain what had just occurred. I just told him “something happened but let’s leave it at that”.

A very surreal situation. I spent the next hour walking around the terminal praying for our flight number to be called out so we can leave as soon as possible. How many people had seen this incident?

My sister in law still finds this story hilarious and I am unsure how helpful this advice is, but she has said “you might want to check YouTube. You know, just in case it’s…you know…online”. I really hope not. Perhaps, I just wish I had recorded it myself. At least then I could have sent it to You’ve Been Framed and got £200 out of the whole situation.

On a closing note, you might be wondering how I plan to ensure I can avoid this situation next time around. All is well, I have a new system. This time, I take my daughter through security and I’ll leave our wonderful son in the careful hands of his father.

So, Guilty Mothers, please just be careful when asked to ‘remove your belt’ for security. It might just surprise you…and everyone else for that matter.